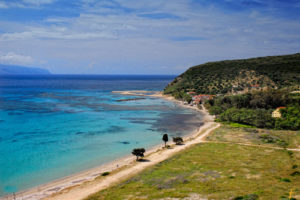 Between Skala and Lourdas, Katelios is on the south east coast of the island. Katelios offers a traditional Greek holiday, with a small harbour and beach, along with several restaurants looking out to sea. After dining in one of the many eateries, why not sample some of the nightlife, which in Katelios revolves around the tavernas, many of which have live entertainment.

Katelios, 32km east of Argostoli, is a small fishing village which has gradually grown around a wide bay on the southeast coast of the island. Agia Barbara, the main beach, offers fantastic views across the Ionian Sea, to the island of Zakynthos and Killini on the mainland. Katelios is one of the smaller destinations on the island and as such, has retained its charm and old style of architecture. Its peaceful atmosphere attracts couples wanting to escape the bustle of busier resorts, while walkers and bird spotters flock here in awe of the natural history. There are a plethora of traditional tavernas as well as more modern cocktail bars. Exchange facilities are available, and credit cards are accepted for excursions and car hire.

Close to our village is Mounda beach, considered to be the most important nesting ground for the endangered loggerhead turtle (Caretta caretta) on the island. The Katelios Group of both local and international conservationists can often be found in and around the village for more information. 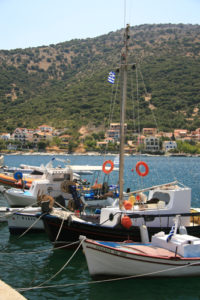 Kefalonia, the largest of the Ionian Islands of Greece at 780 km2, is famed for its landscape combining lush mountain scenery with picturesque sandy beaches. High winter rainfall and fertil soil mean that all of the Ionian Islands are beautifully green, with olive trees, grapes and many more fruits and vegetables growing in abundance. Mount Ainos dominates the view, stretching across the south part of the island, covered with black pine (Pinus nigra) and Greek fir (Abies cephallonica) trees and home to famed wild horses.